a) To accept the program and regulations of TMLGB, to comply with the komsomol discipline, to implement the decisions taken,

b) Working in any TMLGB body,

a) Membership is solely on an individual basis. Each person who wants to become a member of TMLGB notifies this request to the cell they are in contact with. The membership request is accepted by the fully-fledged TMLGB cell by majority vote. It is finalized with the approval of the upper cell.

b) Decisions taken about membership are delivered to the TMLGB Central Committee (CC) through higher bodies without delay. CC or District Committees (CB) can overturn membership decisions.

c) A committee consisting of TMLGB members offers membership by explaining the TMLGB statute and program to the person it deems worthy of membership.

d) Every person who applies for Komsomol membership is in the position of a Candidate Member for a period of 6 months starting from the date of application, in case of being accepted to the Candidate Membership. If necessary, this period can be extended for 6 months with the approval of a higher body. If the candidate's membership is not accepted, the candidate; If komsomol does not contain any harm in terms of safety, it is notified in writing with the reasons.

a) To constantly raise its ideological and political level. Learning MLM with revolutionary practice, grasping it as a guide to action and applying it.

c) To protect the communist unity of TMLGB. To be vigilant and determined in the struggle against any factional work to break this unity and purity.

d) To strictly abide by TMLGB discipline, to play a creative and active role in the implementation of decisions.

f) To put the interests of the people, the proletariat and the revolutionary cause above all personal interests. To be consistent, humble, exemplary and ready for all kinds of dedication in their behavior. To live in accordance with communist principles and morals.

g) To be honest and open to the public, komsomola, comrades and oneself. Being open, determined and courageous in criticism-self-criticism about defeating mistakes. To make all kinds of criticism in order to cure diseases and in komsomol.

h) Paying the dues regularly, working to protect and improve the financial opportunities of the organization.

ı) To continue the class struggle even if it falls into the hands of the enemy, and to turn the places of torture, prisons and courts into places of resistance, areas of propaganda for the revolution and communism.

l) To fight in the spirit of proletarian internationalism against all forms of nationalism, chauvinism and the oppression of oppressed nations.

a) To express his opinion on all matters concerning the politics of komsomol, to make suggestions and criticisms, to express opinions about the members working at any level of komsomol, to actively participate in the appointment of komsomol politics in the organs he works for and in the meetings he attends.

b) To have the right to elect and be elected.

c) To exercise the right to defend in writing or orally in cases where he is accused and tried. Participating in a meeting where a decision on disciplinary punishment is made against him, if confidentiality conditions permit, and otherwise, to make a written defense.

d) To consult in writing to the upper levels and CC about any problem that cannot be solved in the organ he / she is in.

TMLGB is a voluntary association of the communist youth. Each member can leave the association voluntarily by stating their reasons in writing.

7: Discipline and Judgment in TMLGB

a) The members who break the Komsomol union, do not implement the komsomol decisions, damage the democracy within the union, use the duties assigned by membership and komsomol out of purpose, do not comply with the discipline of the union, and dismiss the comsomol masses with their behaviors, are held responsible and judged by the organs they work for or higher bodies.

b) The person is tried in the highest body of which he is a member. If this body does not have at least two members other than itself, the matter is taken to a higher body and the trial is held there. In special cases, komsomol governing bodies may apply to the TMLGB MK with a request for a judgment against a member working under it. MK makes the trial. The MK may request that the proceedings be conducted by a commission to be formed.

c) Trial procedure; Criticism and claims about the person to be judged are conveyed to him and he is asked to take a stand. Meanwhile, the problem is investigated and presented to the relevant person or organs. If the trial is deemed necessary as a result of the investigation, the indictment is prepared and the defense is requested or the defense is made orally in the body. Considering the concrete conditions, if the alleged crime for the person who has been asked for trial prevents him from carrying out his duties in komsomol and if there is a situation of removing the evidence, administrative measures are taken against the person.

Long and short term damages of the crime committed to komsomola, self-criticism of the person on trial, past work, etc. Considering the factors, any of the following penalties can be imposed with the absolute majority of the judging body or PC.

d) The member punished as a result of the trial may appeal to the CC. MK's decision on the trial is binding. It takes effect immediately.

THE ORGANIZATION PRINCIPLES OF TMLGB

The organizing principle of TMLGB is Democratic Centralism. According to this;

a) During the DHD process, only TMLGB MC is determined by democratic elections from the bottom up.

b) All komsomol upper bodies are obliged to account to the association at regular intervals. Komsomol governing bodies are in constant contact with the levels of association above and below. It operates the democratic consultation mechanism continuously.

c) One discipline is valid for the whole komsomol. According to this;

Individuals are subordinated to komsomola, minority majority, lower tiers to upper echelons, all komsomol to CC, and CC to Youth Congress or Conference.

d) All komsomol bodies are obliged to regularly report to the upper organs about their activities. Reports must be approved by all members of the reporting body. Any objections to the report and minority opinion should be indicated.

e) Komsomol internal democracy guarantees every komsomol member the right to defend his opinion on all matters concerning the politics of komsomol, within the komsomol body where he works and in general komsomol meetings.

f) If he thinks that the criticism of the member is suppressed in the komsomol body he is working on and is not taken into consideration, he can repeat his criticism before a higher body. Any member is obliged to implement the decision taken by the komsomol, even if he finds it wrong. He can openly defend his opinion on the decision both in the komsomol body where he is working and before the higher organs. Suppressing criticism within Komsomol, blocking the path of criticism by administrative action is incompatible with the principles of Democratic Centralism.

g) All komsomol bodies are obliged to create a lively debate and an environment in which a conscious discipline prevails in which their members can make their criticism. In the election of the governing bodies of Komsomol, all members participating in the election have the right to object to any nominated candidate, to propose a new candidate, and to discuss each candidate.

The main organs of komsomol are cells. TMLGB is based on illegal organization. Within this organization, komsomol cells consist of at least 3 members or candidate members. The fully-fledged komsomol organ consists of 3 komsomol members.

Under the leadership of the members, TMLGB sympathizers are also organized in cells.

a) To provide its members with sound and regular MLM training and to arm them with this theory. To train cell members to apply MLM in all areas of life.

b) To make propaganda of the MLM and the political line of the communist party in the masses. Turkey and the pioneer of various nationalities of the organized proletariat political party TKP / ML politics and specifically the slogans of the masses tmlgb'n to attribute the policy for their area. Creatively applying Komsomol politics to life.

c) Establishing cells in all mass organizations, especially in unions, cooperatives, student associations, and working to defend the politics of TMLGB and therefore the communist party in mass organizations through these cells.

d) Being in constant contact with the masses. To deal with the problems of the masses, to be a creative leader in solving their problems. To propagate the revolution for a radical solution to problems.

f) To fight against any opportunist deviation within Komsomol.

g) To fulfill all duties assigned by Komsomol in a timely and complete manner, to report regularly to the higher committee on the works.

h) Struggle against nationalism and chauvinism and fulfill the requirements of internationalism.

a) TMLGB Congress and Conferences,

In order to organize the congress, the subregional congresses review the work in the region, examine the report of the UK, decide on it and select delegates to represent the region at the TMLGB congress.

When the MK deems necessary, TMLGB can organize conferences.

Membership recruitment and expulsion is stopped during the preparation process, which begins with the decision of the Congress and Conference.

The full and alternate members of MK are elected in the congress.

TMLGB MK is the highest body among the two TMLGB congresses. MK manages and directs TMLGB between two congresses in the light of congress decisions. It leads TMLGB to implement the decisions of the congress. MK meets at least twice a year. It may meet more often in extraordinary situations.

MK or MKSB can create special task cells attached to itself.

Central organization of TMLGB is on the basis of regional and specialization. Working areas of TMLGB are divided into certain regions considering the economic, political and geographical conditions. In each region, regional management levels (Regional Committee-BK) are formed depending on the CC.

It organizes District Conferences as a means of operating the democratic consultation mechanism among the members working in the region, after the CBs obtain the approval of the PC when necessary.

CBs are obliged to report to PC regularly on all their work.

RELATIONSHIP OF TMLGB WITH TKP / ML

a) TMLGB acts as a sub-organization (comsomolu) of the TKP / ML in its autonomous functioning, depending on the party.

c) TKP / ML MK has the right to send observers to the TMLGB congress to express their opinions and suggestions.

d) TMLGB congress and all elections and decisions of CC are subject to the approval of TKP / ML CC. It is not considered final unless it is approved by TKP / ML MK.

c) TKP / ML CC has the authority to send back to TMLGB CC for re-negotiation or to change the decisions that it does not approve.

f) When the TKP / ML MK wants to employ some TMLGB members within the party, it notifies this request to the TMLGB MK. TMLGB MK evaluates the situation and makes a decision in order to fulfill this request.

TMLGB adopts the principle of relying on the people's youth in terms of financial needs. TMLGB dues, donations and forced income from the enemy form the financial resources of TMLGB. Expenditures are made under CC control. All cells are obliged to keep regular reports and accounts on their income and expenses. 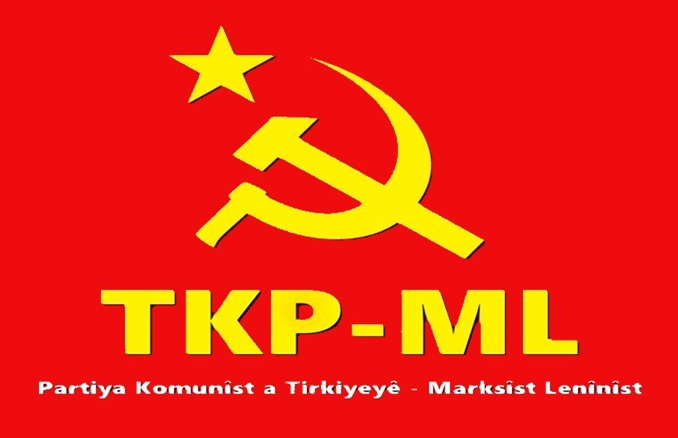 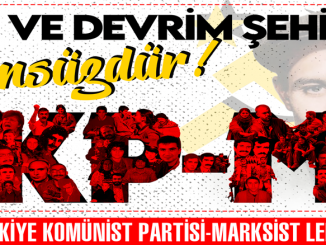 TKP-ML MK: OUR 50TH ANNIVERSARY WITH OUR IMMORTALS!

TKP-ML EXPLANATIONS
January 24, 2022 TKP-ML MK: OUR 50TH ANNIVERSARY WITH OUR IMMORTALS! for comments are off 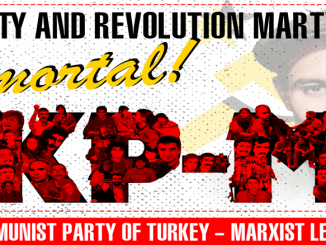 ENGLISH
January 24, 2022 TKP-ML Central Committee: OUR 50TH ANNIVERSARY WITH OUR IMMORTALS! for comments are off

HBDH: “We Destroyed the Oil Pipeline in Maraş”

HBDH
January 19, 2022 HBDH: For “We Destroyed the Oil Pipeline in Maraş” comments are off