Recent events in Palestine, in conjunction with Israeli colonial violence in Al-Aqsa Mosque and the neighboring Cheikh Jarray Quarter in Jerusalem, require further internationalist support to the Palestinian cause in all possible and necessary forms.

The struggle of the Palestinian people has become a symbol of resistance against colonial oppression and injustice for all peoples of the world. After seven decades when the colonial Zionist "state" of Israel was placed in Palestine with the support of imperialism to supposedly control the Middle East, the Palestinian people's struggle for national self-determination has never stopped.

Harsh colonial policies such as the forced eviction of people from their homes, the expropriation of farmland and homes, the arbitrary imprisonment of even children, the construction of walls, the denial of access to water supplies, massacres and wars, far from provoking the surrender of Palestinians, have spawned a new generation of patriots and warriors.

Israel aims to wipe Palestine off the maps and carries out a planned genocide through Nazi methods, such as providing a vaccine plan only to Jews, not Palestinians.

In this general context, in the last stage of the post-election Israeli political crisis, the government that left office repeatedly attacked the mosques and Muslims praying in the squares by the gangs of Zionist settlers during the holy month of Ramadan for Muslims. The Sheikh Jarrah neighborhood in Jerusalem believes these attacks were carried out to evacuate these families from their homes in favor of the settlers themselves.

However, the resistance struggle of the Cheikh el Jarray families combined with the resistance of the Muslims praying has set the steppe on fire again!

So much so that the suppression of this protest caused anger and indignation all over Palestine and all over the world. Solidarity demonstrations were held in many countries, such as Tunisia, Iraq and Yemen. Dockers in Italy, Spain, Tunisia and South Africa sabotaged the loading and unloading operations of Israeli ships. Jordanian protesters broke through police lines and entered the West Bank en masse, an unprecedented event, to aid demonstrators in Jerusalem. Finally, on May 18, a historic general strike literally paralyzed all of Palestine. All the while, armed resistance forces operating in Gaza, after launching an ultimatum to Israel to stop violence against believers, eventually began to hit Israel with nonstop missiles, including Tel Aviv, whose airport had been paralyzed for days.

The signatories of this declaration welcome the war of Palestinian women, youth and people from Gaza to the West Bank and in all cities of the Palestinian Occupied Territories, including Israeli-dominated cities where armed conflicts with the occupiers take place in addition to barricades and demonstrations. In this last event and struggle, women in particular took part in all aspects of the struggle, from the ranks of the armed resistance to the demonstrations and general strikes in the streets.

As the history of peoples' struggle has already amply demonstrated, we claim that the anti-colonial liberation struggle can only be realized through the armed people's struggle.

– The notorious collaboration of Fatah/PNA (Palestinian National Authority –ÇN), which has continued since 1993 with the Oslo Capitulation Accords (recognizing the legitimacy of the occupier), which has led to a wave of arrests against political dissidents in Palestine in recent days;

– whose reactionary regimes are in the service of imperialism; the treachery of the Arab states that, under the auspices of the United States, have officially normalized relations with Israel and have turned their backs on the Palestinian cause for decades;

– We condemn the complicity of all elements representing the imperialist bourgeoisie, from the extreme right to the so-called "left", united to support Israel!

At this point, the undersigned organizations support the resistance forces on the ground, but at the same time express the need for a new strategic line to guide the struggle in Palestine. This path, in all its forms (armed, political, of course), is guided by the revolutionary Marxist-Leninist-Maoist Communist Party in Palestine, which will abolish the current stalemate of the Palestinian cause due to the negative influence of certain reactionary ideologies, such as Political Islam, petty-bourgeois and sectarian armed reformism. strikes, etc.) together is the way of the Protracted People's War.

Long live the heroic struggle of the Palestinian people!

United and independent free Palestine from river to sea!

On the way to the National Liberation Struggle and the People's War in the service of the New Democratic Revolution!

do not keep track: https://www.tkpml.com/international-joint-declaration-in-support-for-palestine/ 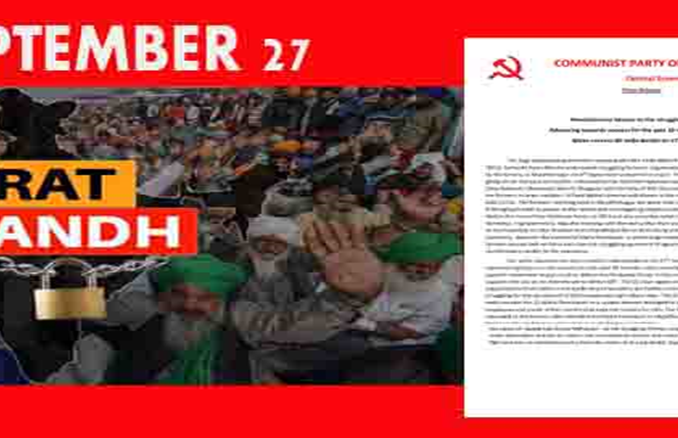