May One message to workers and oppressed peoples around the world

In behalf of the Filipino proletariat and toiling people, the Communist Party of the Philippines (CPP) declares its solidarity with the billions of workers around the planet as we mark May One, the international day of the working class, amid the continuing crisis of the global capitalist system, worsening forms of exploitation and rising resistance against imperialist oppression across the world.

Let us recall and be inspired by the history of working class resistance, a short period relative to entire course of class struggles: from the Europe-wide working class uprisings of 1848; to the momentous albeit momentary establishment of a proletarian dictatorship in the Paris Commune of 1871; to the development of Marxism as systematic ideology of the proletariat; the successful Bolshevik revolution of 1917 in Russia; the 1949 victory of the new democratic revolution in China and subsequent socialist revolution led by the proletariat; and the series of victorious national and social liberation movements in Latin America and Asia from Cuba to Vietnam. Let us recall that for a short period during the early 1950s, one third of humanity was freed from the clutches of monopoly capitalism and benefited from a progressive and democratic order under socialism.

At the same time, let us draw lessons from setbacks and defeats due to working class betrayal leading to the dissolution of the Second International; and to the rise of modern revisionism and defeat of proletarian dictatorships which paved the way for restoration of capitalism and exploitation of workers and toiling people in the Soviet Union, China and other countries.

Let us look forward to celebrating next year the 150th anniversary of Karl Marx’s Communist Manifesto which was first published in February 1848. For close to a century and a half, the Communist Manifesto served as the beacon of workers around the world, declaring the historical mission of the proletariat to end capitalist exploitation by abolishing private ownership of the means of production, build socialism through a period of revolution and attain communism. The publication of the Communist Manifesto marked a clear break from spontaneous workers’ resistance to a conscious and organized undertaking by the working class to direct history and build a new social order.

Workers around the world mark May One this year with a clear view of the acute and protracted crisis of the global capitalist system and how it is engendering conditions for the proletariat to lead all oppressed and exploited classes along the path of national democratic and socialist revolutions. We remain in the era of imperialism and proletarian revolution as posited by Lenin. Despite the defeats and retreat of revolutionary forces around the world, the situation remains marked by the strategic decline of imperialist powers due to the contradictions inherent in the capitalist system that intensify capitalist competition, worsening crisis of overproduction, fall in the rates of profit, aggravate the exploitation of workers and plunder of resources, and heighten inter-imperialist competition leading to wars and redivision of the world.

Over the past three decades, workers have been subjected to different forms of “flexible labor” to intensify work through the application of high technology (robotics, computerization, artificial intelligence, and so on) and extend working hours with the aim of bringing down wages and costs of production and maximize the accumulation of surplus value. The bourgeoisie has relentlessly attacked workers’ unions and organizations to prevent them from asserting their rights and bargain for higher wages and better working conditions. It has cut social spending resulting in deteriorating living conditions for millions of workers.

Imperialist countries have imposed a neoliberal policy regime on its semicolonies and backward countries which allowed it to intensify the exploitation of cheap labor, dumping of surplus commodities, and the plunder and extraction of natural resources resulting in the aggravation of economic crises and socioeconomic conditions of billions of workers and toiling people. Oppressed nations have been condemned to economic backwardness, suffer from widespread unemployment, and are drowning in large amounts of foreign debt. In both the backward countries and capitalist centers, workers and toiling people suffered from the debilitating effects of the Covid-19 pandemic due to the gross state of public health service.

Led by the US, the imperialists have intensified its aggression against countries which have asserted national sovereignty. Over the past decades, the US has attacked one country after another including Iraq, Libya, Syria, and Afghanistan, has carried out acts of intervention and subversion in Venezuela and other countries, and has subjected Cuba, Iran, and North Korea to economic sanctions.

The contradiction between the imperialist powers and power blocks over spheres of influence and control have erupted in one proxy war after another, most recently in Ukraine. For more than 30 years, the US has pushed the expansion of NATO to former Warsaw Pact countries in Eastern and Central Europe through diplomacy and war, violating the 1991 Minsk agreement and assurances made to the Soviet Union before it dismantled itself in 1991.

The push for the inclusion of Ukraine into NATO and the US-supported encirclement and intensified shelling by Ukraine against the Russian-speaking Donbass region bordering Russia was an outright act of war. It provoked Russian counter-aggression with the declared aim of putting an end to the Zionist regime in Ukraine and the fascist nationalist forces integrated into the Ukrainian armed forces. The war is now being prolonged by the US to wear down Russia and maximize profit for the US defense industry. The US extended a $3.5 billion military aid last month to supply Ukraine with artillery and other military weapons, and recently approved another $33 billion in military and economic support. The imperialist proxy war in Ukraine has deepened the divide between the imperialist power blocs, with the US and NATO on one side, and Russia and China on the other. Amid the prolonged capitalist crisis and rising inter-imperialist competition, there is great likelihood of limited and extended wars erupting in different parts of the world in the coming years.

The proletariat and oppressed peoples must take advantage of inter-imperialist wars to advance the cause of the socialism and national and social liberation by waging armed revolution and civil wars against the ruling reactionary state in different countries. At every opportunity, the proletarian revolutionaries must strengthen its capability for political leadership by building and consolidating their communist parties through study and application of Marxism-Leninism in their own countries, striking deep roots among all positive class forces, leading them in democratic mass struggles and teaching the path of armed revolution to seize political power. Specifically, communists must tirelessly go among workers, conduct political education, and help them build or rebuild and strengthen their unions, and establish Party branches at every workplace.

We mark May One today as we stand on the threshold of a new resurgence of national democratic and socialist revolutions led by the proletariat. Across the world, the oppressed and exploited masses are rising up in numbers spontaneously and consciously to fight for their class interests. There is a strong push for establishing unions and getting organized. Workers and people are launching strikes and other mass actions across the world to demand wage increases and better working conditions.

Communist forces are exerting effort to build their communist parties as advanced detachment of the working class, study history and draw up a clear revolutionary program. People’s wars led by communist parties in India, Turkey, the Philippines and other countries are persevering and steadily gaining strength despite the all-out counterrevolution. In the face of capitalist crisis, and with the proletariat at the helm, the flames of armed revolution are bound to spread in a great conflagration across the world. 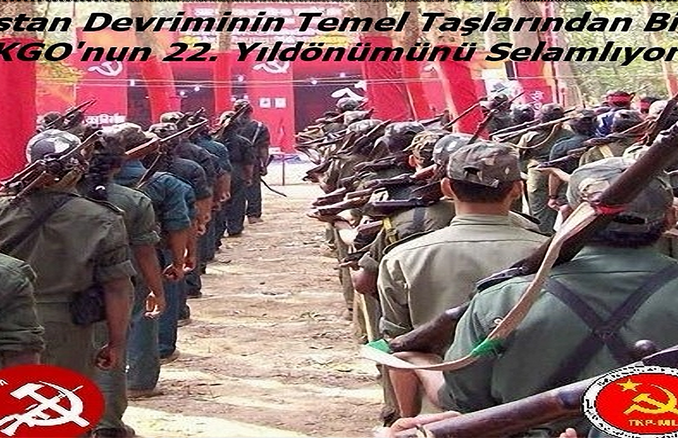