Nubar Ozanyan Commemorated on the 5th Anniversary of His Immortality

Nubar Ozanyan was commemorated on August 13, 2022, on the 5th anniversary of his immortality, with an event held in the Middle East. 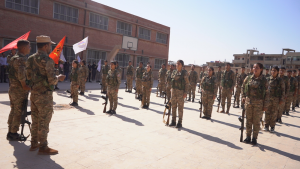 Melkonian in his speech “Our martyrs, whose memories and struggles we have engraved in our memories, are the way to reach our freedom, principles and values ​​for all peoples” he said and continued as follows; “We embrace the struggle of our commander Nubar Ozanyan, who devoted his life to the revolutionary struggle, with all our faith and determination. We reiterate our commitment to his struggle here today, in the 5th year of his immortality.”

Melkonian's speech “We will continue to keep our Commander Nubar Ozanyan alive in every inch of the Rojava revolution lands we defend” He ended with his words. Mention "Martyr Namir" After the motto and the military parade, the hall continued with the event. 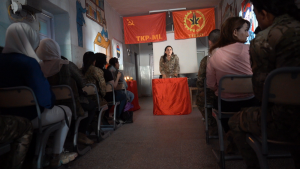 "Comrade Nubar was a symbol of the reality of a people experiencing genocides!”

After the opening speech at the hall event, a speech was made on behalf of TKP-ML. In speaking "On behalf of my party, I greet you with my most sincere revolutionary feelings. We are here today to commemorate Comrade Nubar. Comrade Nubar is in a very important place for our party. Our party has gone through difficult conditions many times in our 50-year history of struggle. During these periods, the coming forward of some comrades carried the party forward. It has been a pioneer for our struggle. Like the arrival of Comrade Nubar in Rojava, his whole life has been an exemplary life for our party and the struggle for revolution.”Was said. 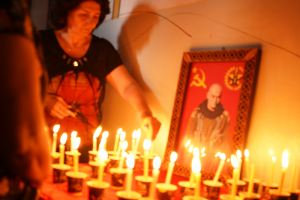 "Comrade Nubar was a living symbol of the reality of a people experiencing genocides. Nubar Ozanyan is the name of the rebellion of the survivors of the 1915 Armenian Genocide against the fascist Turkish state. The statement continued as follows; “Comrade Nubar is also the military accumulation of our party. His revolutionary life, from Palestine to Hayastan, from Iraqi Kurdistan to Rojava, is our war experience. In the light of these experiences, we will continue to continue the war. We commemorate our martyrs once in the person of Nubar Ozanyan. We will keep the memory of Comrade Nubar alive. We will fulfill the promise we made to him, we will defend the Rojava revolution, and we will continue to work for the Armenian people to defend their own organizations.” 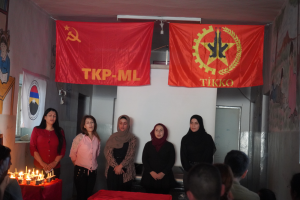 in commemoration Armenian Social Assembly in the name of Anahit Kasabian He also gave a speech. Anahit Kasabian “Nubar Ozanyan, who we lost five years ago, sheds light on our struggle with his communist personality, modesty and self-sacrifice, and illuminates our path.He started his speech with the words " “We have no other way but to struggle against the attacks of the fascist Turkish state on our lands. Defending ourselves and raising the fight against fascism is our only way.” said. Kasabian's speech “Today, we act with the awareness that defending the Rojava revolution is to continue Nubar Ozanyan's struggle and we pledge allegiance to his struggle” ended in the form. 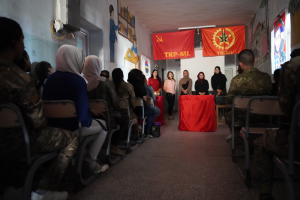 After watching an Arabic movie about Nubar Ozanyan's struggle, the event ended with Turkish and Arabic anthems sung by the members of the Armenian Social Assembly.

ENGLISH
September 27, 2022 Situation in the World Capitalism is leading for Humanity and the Planet to Destruction comments are off

INTERNATIONAL
September 27, 2022 For Interview with the General Secretary of the Communist Party of India (Maoist) comments are off

HBDH Şenol Sağaltici and Ümit Tekin Militia: Our Target is Those Who Produce for the Army!

HBDH
September 25, 2022 HBDH Şenol Sağaltici and Ümit Tekin Militia: Our Target is Those Who Produce for the Army! for comments are off

Maoist Gaze, the central publication of the Communist Party of Nepal (Revolutionary Maoist)

INTERNATIONAL
September 25, 2022 For the Maoist View, the central publication of the Communist Party of Nepal (Revolutionary Maoist) comments are off