The military situation for the self administration is highly changeable. With this in mind, the following is our experience of two visits to the International Freedom Battalion and their position on the front facing the Turkish state forces and their mercenary gangs. Bear in mind that these visits are now a few days old, the situation has changed since then and may have changed more than we can account for. Obviously this report will have to remain more vague than usual so as not to reveal the location or disposition of our forces.

As we drove to the front with comrades, the first and most obvious difference that struck us was the presence of the regime. Occupying a large compound encompassing several former YPG points on the outskirts of Tel Tamer, the idea that our comrades were now part of the Syrian Arab army felt laughable. The ‘hungry army’ was confined to its compound, having erected as many regime flags as possible on the buildings and stretched across their vehicles to try to deter airstrikes. The buildings they occupied still displaying pictures of Ocalan on the walls and the banners of the taburs they previously housed over the entrances. From the outside it appeared more like the SAA had joined the SDF.

Speeding past Asayis (Rojava’s community-based police) checkpoints, we saw that most of the villages on the approach to the front remained occupied, the villagers living a tense existence, ready to flee at a moments notice if hostilities were reopened. Other than the villages currently occupied by military forces, a semblance of civilian life continued. Even some houses in no-man’s land were still occupied by elderly couples who would refuse all entreaties to leave. 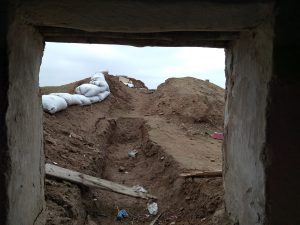 Winter has brought a cessation of fighting, the heavy mud making movement across the countryside incredibly difficult. This was reinforced by the presence of Russian forces, who would occasionally patrol in the no-man’s land between SDF and Turkish state held villages and their jets could occasionally be heard in the skies above.

Still the war still felt very immediate when we arrived in the village where the IFB were stationed. Guard shifts are long, Turkish drones patrolled regularly and work was contant to foritfy the village and build entrenchments. The enemy are only a kilometre away, Turkish flags can be seen flying above some of their positions. Poor weather meant we remained unmolested by drones during our visits. Gladly, as they can remain in the area for up to twelve hours and attempting to move out of cover can mean death. Drone strikes are a common feature of the front.

The IFB is currently constituted by kadros from several of the Turkish communist parties, internationalist volunteers and members of the Armenian Nubar Ozanyan tabur. The tabur commander currently is a member of DKP/ BOG. Also present in the village are SDF forces and a Syrian Arab army unit*. The SAA have been struggling to adjust to the nature of the war. They built their entrenchments in the open and lost several fighters to a drone strike, subsequently they have refused to perform guard duty.

Morale is high and the comrades are well-armed and well-prepared for the coming fight. While conditions on the front are tough, the proximity to the towns and cities of Rojava mean that comrades can be regularly cycled in and out. Sometimes individuals can even leave for a shower and a decent meal in the day before returning for night. Opinions are split about when fighting will resume but the consensus is that it’s only a matter of time. Many feel that we should be making the first move by going on the attack. Turkey’s mercenary gangs clearly fear this possibility, at night their positions occasionally explode into lengthy bursts of gunfire at nothing in particular, terrorised by imaginary forms moving in the darkness.

The biggest liability our forces have is the anxiety caused by sustained airstrikes, particularly for less disciplined or experienced SDF units. For now the Turkish airstrikes are kept at bay by the Russians but this will not continue indefinitely. All our comrades can do is dig deeper and build better entrenchments.

The revolutionary forces must prove to the people that it’s capable of defending them. The mercenaries of the Turkish state are cowards, even with a huge numerical superioirity, they only fought in Serekaniye because the Turkish state closed the border behind them, preventing their flight. The war will heat up again sooner or later and if our forces are able to adapt to the air war fought by the enemy, we can win.

*The morning after the assassination of Qassem Soleimani, the regime unit was abruptly pulled from the village, where to or why exactly we don’t know. 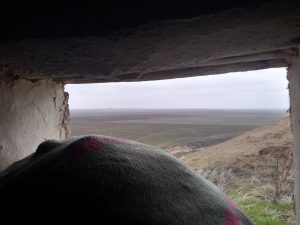