Against Fascist Aggression and Occupation: REVOLUTION IS THE ONLY WAY!

On 19 November 2022, the Turkish state carried out intensive airstrikes against the Medya Defence Areas, Rojava and Iraqi Kurdistan, bombing civilian settlements. Dozens of people were injured and killed in the attacks.

The Turkish state carried out these attacks with the permission of the imperialist powers that hold air dominance in the region. It is a Turkish state tradition to take advantage of inter-imperialist contradictions in terms of its own interests, and this tradition has continued in the recent attacks. The AKP-MHP government carried out these massacres with the consent of Russian and US imperialism.

Turkish fascism is not content with the regions it occupies in Northern Syria, it wants to occupy the whole of Rojava. For this purpose, it is making intense efforts to obtain permission from the imperialists to attack from the land. On the one hand, the Turkish Republic is reorganizing the jihadist gangs it occupied and under its control, on the other hand, it continues its air and ground attacks against the territory of the North East Syria Autonomous Administration.

It is an insufficient perspective to see this fascist aggression of the Turkish state only as a plan of the AKP-MHP fascist government regarding the elections. The Turkish regime sees the democratic and progressive gains of the Kurdish, Arab, Armenian, Assyrian people and women, especially the Autonomous Administration of Northern Syria, as a threat to itself and wants to strangle the Rojava Revolution.

With this fascist aggression, the AKP-MHP government also wants to cover up the biggest economic crisis, hunger and poverty it has experienced in its history. With the theft-corruption policies of the AKP-MHP government, the masses of the people are plunged into deep poverty. The anger and reaction of the masses towards this situation is tried to be suppressed, and the target is diverted with fascist aggression and “terror” demagogy.

For this purpose, it blowed up a bomb and carried out a massacre in Istanbul Taksim through its own gang organisation and used this explosion as a justification for attacking Rojava lands. Not satisfied with this, it tried to legitimise its aggression by “firing a few missiles” from the territories under its control, again massacring civilians.

It is not only the duty of the Rojava people to defend the Rojava Revolution and its territory and to resist the attacks of the fascist Turkish state. We have no doubt and no one should doubt that the people of Rojava are defending/will defend their lands and revolution with their Kurds, Arabs, Armenians, Assyrians, women and men. Anyone who ignores this resistance, trivializes it and does not stand by it will take its rightful place in the dustbin of history!

The anti-people and massacring nature of the Turkish state has once again been revealed with these attacks. In order to overcome the crisis it is in, and especially to liquidate the gains of the Kurdish national liberation movement in the region, and to destroy all the progressive and revolutionary dynamics in the region, fascism also conducts an intense psychological warfare as well as military aggression. As in Taksim, it fuels racism and chauvinism with massacres it organises and carries out, and sows the seeds of hatred and enmity among the peoples in the region.

The fascist TC also aligns all the cliques of the Turkish ruling classes through its own massacre attacks, “terror” demagogy and “survival problem” statements. In addition, it backs up all kinds of intra-order, reformist organizations.

It is the most important revolutionary task in the current situation to stand against this aggression of the Turkish fascism, to raise the actual and legitimate struggle in every field we are in, especially in the war positions, and to organise revolutionary resistance.

The only way against fascism and occupation is revolution! 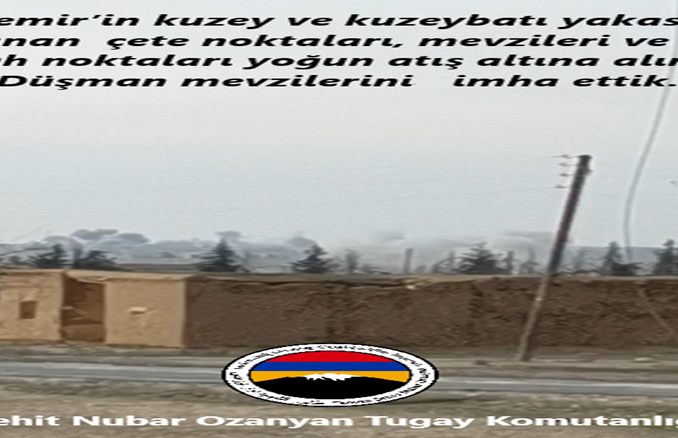