We exploded the transformer belonging to the site where AKP members live in Pendik.

On 18.12.2021, around 16:40, we destroyed the transformer of the Kentev Çarşı site, where most of the AKP members and administrators live, in Istanbul / Pendik Velibaba neighborhood, with a sabotage action.

Just today, 2-year-old Yunus Emre Bilen died in a house in Diyarbakir, where DEDAŞ cut off his electricity due to debt, his heart stopped from the cold. In Turkey and Kurdistan, tens of thousands of poor live without electricity. AKP-MHP fascism keeps the rich alive and kills the poor. AKP's light only illuminates its own. The bright way of poor neighborhoods, slums and slums is our united revolutionary struggle. This time, we leave those who darken the table of the poor in the dark.

The lives of fascist supporters who stay in luxury districts, estates and villas by relying on AKP-MHP fascism will be dark and they will not be able to get out of the pit that AKP fell into.

Today, every part of the country is dealing with the economic crisis. Prisoners in dungeons die one by one because there is not enough medicine, food and healthy shelter conditions, it is called suicide. Prisoners are held captive to death in prisons. Poverty abroad has turned into isolation, oppression, torture, and the suppression policy of fascism. Immediately after the murder of Garibe Gezer, the news of the death of the prisoners Abdulrazak Suyur, Halil Güneş, İlyas Demir and Vedat Erkmen comes. We will be the voice of the prisoners who were taken to single cells and torture rooms and murdered.

As the HBDH Militia, we will not allow the arbitrary torture and massacre of revolutionary prisoners in the dungeons. We will hold accountable all institutions and individuals who have a hand in this policy of fascism. 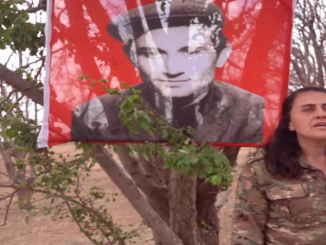