COMMUNIST LEADER IBRAHIM KAYPAKKAYA IS THE NAME OF CONSISTENCY OF REVOLUTION AND DESTROYING FASCISM. HE IS OUR TORCH FOR THE PAST 47 YEARS!

May 18 has a special place in the hearts of our oppressed peoples from various nationalities and minorities. May 18 is the name of the day when comrade Communist leader Ibrahim Kaypakkaya defeated fascism in dungeons. May 18 proved that communists could inflict heavy blows on fascism even in dungeons, and at the same time became the symbol of revolutionary struggle, resistance and rebellion that would last for generations.

May 18 is the day of outcry against oppression of exploited workers, peasants who is getting poorer and poorer and whose lands are poisoned. It is also the outcry of women and LGBTI+ individuals who faces massacres on daily basis, outcry of Armenians, Kurds and other minorities who have experienced genocide, outcry of Alevi’s whom are not allowed to practicing their faiths and the outcry of immigrants who are facing misery and racist attacks on daily basis.

Fascist ruling forces of Republic of Turkey thought by killing comrade Ibrahim, they can end the struggle for communism. However, after 47 years struggle for communism continues in Turkey and Kurdistan. Wherever there is an antifascist, anti-imperialist rebellion, wherever there is resistance, comrade Ibrahim is there, and he continues to lead. We can hear his revolution calls in the echoing sounds of exploited worker’s hammer, in the calloused hands of long-suffering peasants, on the barrel of the gun belonging to a guerrilla who have raised the flag of revolt to fascism, in the slogans of women and LGBT+ individuals who are massacred on daily basis, in the slogans of youth whose future is stolen, in the roots of the trees and forests which has been destroyed, in the fight for justice of Alevi’s and in the silent scream of those facing genocide.

As if all the oppression, cruelties, massacres are not enough, we are addressing our people who pay the price in the corona epidemic. The only reason for this epidemic is the imperialists and capitalists who destroy our nature and privatise the health system. The measures taken are but dressings, and the rich are intended to protect themselves in the first place. During the epidemic, capitalists deem proper death to workers and laborers. This epidemic has once again brought us the real and bloody face of the system. There is no value for any oppressed or exploited in the eyes of system in times of disaster.

Our people should know that the response of the comrade Ibrahim’s call for revolution is the fall of the fascist dictatorship. Revolutionary violence against fascist power, which continues its power from the beginning to the end with force and oppression, is our sine qua non. Our organization and arms are the only ways to get rid of fascism.

We continue to challenge fascism and imperialist-capitalist order on the day we commemorate comrade Kaypakkaya. As we did on May 18, 1973, today, we are waving the red flag we have taken over from comrade Ibrahim, in all our positions, and we continue to raise the hope.

Do not be afraid that the fascist power, which is equipped with its media and high technology, cannot be destroyed.

Do not think that the people who suffered genocide will be silent forever, they will be bow to their fate.

Do not think that the working class will not rebel against this system of exploitation. We will of course destroy this order.

We will ask for the account of Helin Bölek, Mustafa Koçak, İbrahim Gökçek and the revolutionary and patriotic martyrs whose tombs were destroyed.

We are reborn from our own ashes; we fuel the fire of rebellion with our wings from the fire. We re-ignite the spark of Vartinik in the hearts of all oppressed. We will ignite this spark, which they could not extinguish on May 18, 1973, throughout the country.

We call on all our people to strengthen our struggle and take their place in the path to revolution. 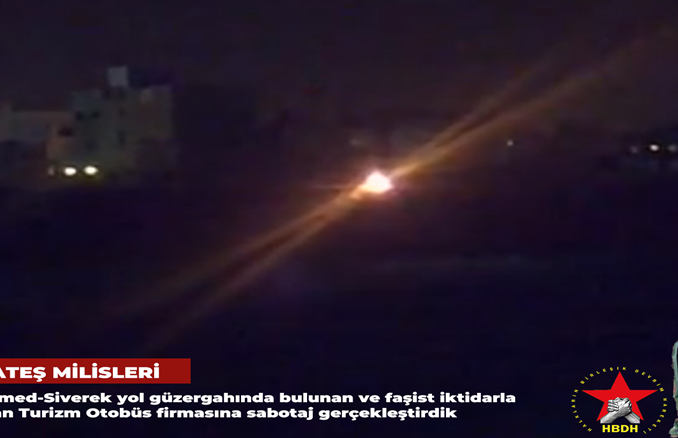