We remember with respect those who were immortalized for the revolution by keeping our promises to them!

The class struggle has never / will never go through a “comfortable”, “trouble free” period. For, until the classless and unlimited world is established, the competition-war of the imperialist capitalist system will be over, neither for the ambition for profit nor for the division of spheres of influence for the sake of this ambition; neither the exploitation of the working class and the oppressed masses in the name of profit-more profit, nor poverty-hunger will disappear. Therefore, the oppression, cruelty, aggression, and massacres of the ruling classes against the oppressed classes to maintain their rule will be permanent until this enduring system disappears.

The reality of the ruling classes vis-à-vis the working class and the oppressed peoples has become more visible during the pandemic process that has affected the whole world over the past year, and it has been revealed that states are the state of a handful of parasitic capitals and their collaborators. All the peoples of the world have seen that the measures taken by the governments, who continue to work the working class as if condemning the working class to death, and who declare all the “aid packages” so that the profits of the bourgeoisie do not fall, do not go beyond the “stay at home” calls to prevent the spread of the virus. The masters of the imperialist-capitalist system, which turned the pandemic into an opportunity, and their collaborators-henchmen, on the one hand, deal with the laws that will control the peoples and usurp their acquired rights, on the other hand, they “sacrifice” the lives of the peoples to the capitalist competition with the “vaccine wars”.

Today, the imperialists have turned all corners of the world from the Middle East to the Caucasus, from Africa to Asia into a war zone, into a persecution for the peoples, a robbery mechanism, a pillage system. But while doing this, it also ferments the anger of its opponents, namely the gravediggers, and this anger grows too large to remain at the bottom, hitting the surface piece by piece with fluctuations of various sizes. Of course, all this would have a counterpart: In the Black uprising in the USA; In the anger that burns the streets in France; In the crowds filling the streets against poverty in Egypt, Lebanon, Iraq; in the wave of rebellion that ignored the prohibitions of women Just as in the resistance of Rojava and Karabakh peoples who fought against occupation, oppression, and plunder.

Of course, it is possible to see this situation in our own country, in the flurry of the AKP-MHP government. In the second half of the last year, the working class, which was disconnected from each other, lacking revolutionary communist leadership and thus mobilizing even if not threatening the system as a whole, organized resistance in front of the factories or bosses’ houses, in Ankara marches, on the streets, all the oppression of the Kurdish national struggle, trustees, arrest, The resistance that still squeezes the state into the corner despite the massacre attacks, the revolt of women that set the agenda in our country as well as in the world, on the streets and on social media and managed to protect their rights, the move of the youth to organize a united struggle, the practice of collecting the struggle against fascism, etc. They are signs that the four-year period that passed especially after the 2016 “coup attempt” was the most active and open to improvement. The AKP-MHP government is also aware of this situation and is getting more aggressive to solve the survivability problem, which is deepened with the fallout of the “plans to collapse” the peoples, but the more aggressive it gets, the closer the “sad ending” awaits it.

Of course, it is possible to see this situation in our own country, in the thrash about of the AKP-MHP government. It is remarkable that the working class, which mobilized in the second half of the previous year, even though it did not threaten the system, despite being disconnected from each other, lacking revolutionary communist leadership. It is important for the workers to organize resistance in front of the factories or bosses’ houses, in Ankara marches and on the streets. Again, despite all the oppression, trustees, arrests, and massacre attacks against the Kurdish national struggle, the persistence of the Kurdish national struggle still drives the state into the corner at the most is obvious. The rebellion of women, which set the agenda both on the street and in social media and managed to protect their rights, is known in our country as well as all over the world. The move of the youth to organize a united struggle, the practice of collecting the struggle against fascism, etc. They are signs that the four-year period that passed especially after the 2016 “coup attempt” was the most active and open to improvement.

There is no reason to despair in the fading of these fluctuations on the surface, sometimes resulting in failure, because the more they meet and merge with their pioneers, these ripples will turn into giant waves, and they will know to drown them in this cruelty sea created by the “world of masters”. This is not a prophetic story, but a dialectic’s “surprise” to a handful of exploitative parasitic bourgeoisie.

The masters of the system know this fact from their experience from the Paris Commune to the October and Chinese Revolutions, and for this very reason they try to raise the degree of persecution and suffocate the peoples through repression. It is precisely for this reason that it makes a move one after another like a monster and has tantrums against the struggle of the working class and oppressed peoples. Even though this disturbance on the front of the oppressed, this fermenting anger is still relatively far from overthrowing the powers by forming giant waves on the surface, even this prevents the oppressors from sleeping comfortably. On their sleep, the “spectre” of those of us who lost their lives and became immortal in the march of revolution and communism is wandering.

The martyrs of the revolution and communism were immortalized by revolutionizing “under the most difficult conditions”, just like today. What did we say; the class struggle has never / will never go through a “comfortable”, “trouble free” period. Revolutionism would have been like strolling on the brightest, cleanest streets of the city, but we saw our comrades losing their lives, in the harsh conditions of the mountain tops, on the muddy and steep slopes of the remote neighbourhoods of the cities, in the dark ambushes, in the dungeons for the revolution. While we send them off to eternity, they did not leave our bedside as symbols that perpetuate our belief in communism, reinforce our hope, increase our courage, and grow our love for the masses of the people. Not only with their good-beautiful-revolutionary aspects, but they also always stood by us with their mistakes, their methods of dealing with their mistakes, their determination to fight again every day, their determination to overcome the obstacles that defeats, and betrayals put on their way, and with the consciousness of turning despair into hope, they taught us. As we learned from them, we surpassed the thresholds we encountered, we had to learn from the same mistakes as much as we could … In short, they continue to guide us as they turn the dreams of ruling classes and parasites into nightmares. With the strength we receive from them, we continue our march against defeats, betrayals, and those who try to drag us into the swamp, we continue our march, keeping the flag of communism at the top.

We know that being right; The reality where representing the good, the truth and the beautiful, hence the future adds meaning / value; It is a lantern kept to immortality in the eyes of our martyrs. Their memory and struggle illuminate the path of our activity, clarify our goals, and increase our determination and courage. They left us by handing over a great mission to us. It is the duty of all of us to fulfill this mission, of which their value and importance have increased even more.

Let us carry their war further by taking over their weapons, raising their flags higher …

Forward to fulfil the will of our comrades who build indestructible bridges to the future!

Their heroism will live forever in our struggle!

Long live our party TIKKO, KKB and TMLGB under the leadership of TKP-ML! 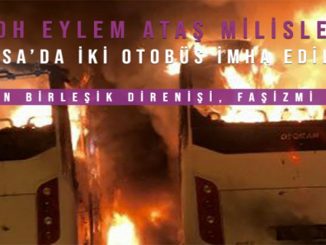 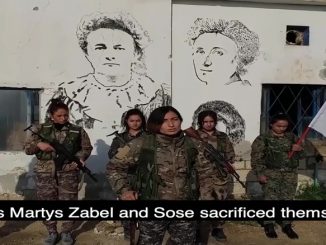 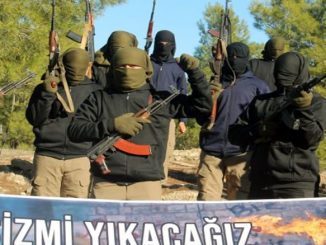